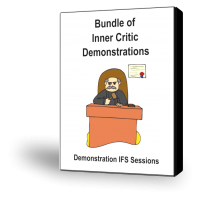 NOTE: This Bundle is included in the All Demo Bundle of Demonstration IFS Sessions

Look for the second email you get, which has instructions for logging in and then listening or downloading. If you don’t see it, please check your spam folder.

NOTE: This Bundle is included in the Bundle of all Demonstrations of IFS Sessions

These demonstration sessions shows how to work with Inner Critic parts. In IFS terms, Inner Critics are protectors that use self-judgment as a strategy for protecting you. In working with Critics, a cluster of other parts is often triggered, which includes the Criticized Child and the Inner Defender. Our IFS Inner Critic work is described in our book Self-Therapy for Your Inner Critic.

There are no reviews yet.

Only logged in customers who have purchased this product may leave a review.